Anti-abortion group WeNeedALaw.ca set up 100,000 small pink and blue flags at  A.D. Penner Park in Steinbach, Man. Saturday, saying each flag represents babies who are aborted in Canada every year.

On Saturday 200 volunteers gathered at the park to put the flags in the ground, as part of a national event called, WeNeedaLaw.ca, a Canadian anti-abortion website. Organizers said the goal is to advocate for specific federal laws to “protect children in the womb.”

Conservative MP, Ted Falk was also in attendance and posted videos and posts about the event on Facebook.

“Each one of these flags represents a life that was taken before it as born here in Canada,” Falk said in a Facebook post. “It’s an incredible site, very moving to see here to see this many flags here, to know each one of them represents a life… an unborn child that won’t see the light of day.”

Data from the University of Ottawa published in 2015 suggests there are indeed about 100,000 abortions each year—half performed in hospitals and half in clinics.

In Canada, abortions are legal and free. Medical ethicist and University of Toronto professor Dr. Kerry Bowman previously told Global News health care professionals will provide abortions “no questions asked” but won’t stand by abortion because of the sex of a baby.

“If Canada is going to continue to be a nation that is blessed, I believe that we must draft and pass legislation that puts in place protection for unborn children,” Falk said in a media release.

Amy Tuckett-McGimpsey, with the Women’s Health Clinic said a loud, anti-choice minority tries to reopen this issue every year.

“But we know the majority of Canadians believe in a woman’s right to choose. Women’s Health Clinic believes in safe, legal access to abortion services, and to us the flags represent every time a person has exercised that right,” she said.

‘She was so terrified’: Woman says abortion access in Alberta is an issue 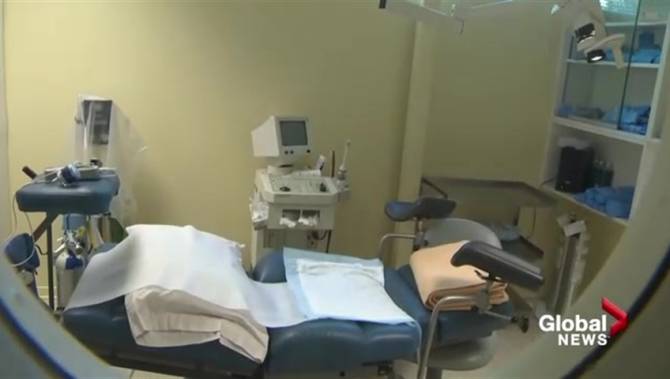 Steinbach held its first Pride Parade in July, drawing in more than 1,000 people.

Organizers of Steinbach Pride were met with opposition and did not attend the event, including Falk, who cited personal commitments and religious beliefs.

In a written statement, Falk said “I’ve been clear on this issue many times, and have made my position public on my values of faith, family, and community.”

Michelle McHale, one of the organizers of the Steinbach Pride parade said Falk’s involvement in Saturday’s anti-abortion event is concerning.

“Mr. Falk is a leader and this is making a statement and perpetuating a certain belief that creates an environment that is not safe,” she said. “He is not considering life circumstances that some women have.”

With files from Erika Tucker