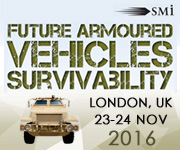 LONDON, ENGLAND, UNITED KINGDOM, August 15, 2016 /EINPresswire.com/ — Could you benefit from meeting active buyers from the military armoured vehicle programmes, as well as technical experts and platform engineers from leading OEMs, while there is still a chance to influence their procurement decisions?

If the answer is yes, then don’t miss the Future Armoured Vehicles Survivability 2016 conference taking place on 23rd – 24th November 2016 in London, UK.

This unique conference focuses on the collaboration between military and industry, inviting not only the programme managers and operational commanders at the forefront of armoured vehicle procurement and use, but also, the lead engineers, chief scientists and technical directors from the vehicle manufacturers themselves, who create the platforms and technologies at the heart of armoured vehicle protection.

Just some of the platforms discussed and represented at this year’s Future Armoured Vehicles Survivability 2016 includes:

If your business is targeting armoured vehicle contracts in Israel, USA, France, Canada, UK, Denmark, Czech Republic, Sweden and Germany, you simply cannot afford not to be at Future Armoured Vehicles Survivability 2016.